We’ve been planning to continue the traditions of the Omsi+ since the start of our page. This includes interviewing some well-known and also some less famous developers, so you can learn more about their work. This time, we had a conversation with Sobol.

When did you start to play Omsi? How did you discover the simulator?

Sobol:
As far as I can remember it was about year 2014 or 2015. I saw polish youtuber’s video from Wujek Bochun on OMSI 2, then I tried game myself, started exploring endless addons to choose from. I liked the game better as other bus sims because it was doing what it’s supposed to do better.

Your most known project is probably the Neoman Overhaul pack. Why did you choose this type?

Sobol:
It started with modding V3D Lion’s City to make A21 a 3 door variant. It was the time I was still learning how to mod, and how to use blender. One day I thought ’maybe I shall release this?’ and so I did. People liked the project. I saw famous OMSI youtubers showing it on their videos, actually not complaining about it, but rather saying its decent and quite good. Also I really like MAN Lion’s City busses, as I found them really interesting, nice and reliable.

What difficulties have you encountered during the modelling/scripting?

Sobol:
Most difficult thing up to this day for me is scripting. I barely know how to script well in OMSI, I can alter scripts a bit, but I can’t really wrote more complicated and complex scripts. In moddeling worst part for me is modelling exterior things. I really like modelling interior things, seats for example.

Do you like working together with other developers, or do you prefer working alone?

Sobol:
Mostly I do work alone on projects, asking for tips when doing some things. But without countless people I wouldn’t be able to do such a good job with scripts for example.

What do you think of your Patreon subscribers, does the system work as you’ve expected? What did you think of the community after the issue with the Solbus, is it worth continuing the Patreon system?

Sobol:
Patreon was at first just an Idea to try it out if it will work or not. It did better than I expected it to work. People liked the idea of supporting the creator and becoming a beta testers of my projects. Leaking is something that is a big issue in whole OMSI community. People leak VIP/WIP projects, which is really frustrating for creators. I personally do like that wow effect after new release of something. There is not really much I can do to prevent leaking of beta packs, I just can rely on people that they will not leak things. For me it is worth continuing the Patreon system as long as there are people to support me and as long as I’m doing my projects.

Sobol:
Upcoming 2021 will probably be the year of some releases, I want this year to release 2 Neoplan packs – N40 and N44 family.

After this two significant releases I want to start work on O405 family which is requested by many people. I also think about the

Neoplan N80 family, those weird futurstic busses. NEOMAN Overhaul will also get some new busses too! I want MEGA busses to be finished by February and by then have some work done on MIDI MANs.

If you’re interested in Sobol’s work, visit his Facebook page. If you’d like to support him, his Patreon page can be found HERE.
We wish you a Merry Christmas and a Happy new year! 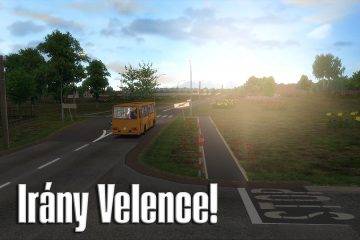 Let’s take a journey with Marci875 (another Hungarian content creator) to the third biggest lake in Hungary (well, if we don’t count Lake Fertő), and take a look on the transport around it! At first, Read more…