The first part of the Neoman Overhaul pack by Sobol is almost finished, as he posted on his Facebook page. The first pack of the final version will include the following types: A20, A21, A37, also the A45 is possible. The A23 and A40 will be added later.

Sobol presented his newest project, the Solbus Solcity 12M. In real life, this type is mostly in operation in several cities across Poland, such as Warsaw, Gdańsk and Lublin. An open beta version (12m long, 3 door) is already available for Patreon subscribers, however, the bus is still WIP. More recent informations can be found on Sobol’s Facebook page or Discord server.

Here’s a short review: although this is a beta version, the bus is already playable. There are some missing parts in the driver’s cabin and the interior, but overall, we haven’t found any serious problems with the bus.

Although this bus is already available for the game, Sobol decided to make a refurbishment and also other versions, as this type is actually similar to the MAN Lion’s City. The following versions are planned besides the N4416: N4407 (8,69m), N4409 (9,59m) and N4420 (14,7m). The earlier version released by MVAG (Justin) is available here.

Well, French projects are rare to find in our monthly reviews, so it’s time for one! Let’s see Kescrole’s Irisbus project.
After the partial success of the Evadys comes the Crossway, the 12,8 m long version, to be more accurate.
The model was made from scratch, and looks optimalized and FPS-friendly. The scripts are not finished and some sounds are missing, especially the engine ones. More informations about the project can be found on the author’s Facebook page.

BusTrainz posted a picture about the next type of the addon, the 260.43 (the picture can be found here). This type was also known in Germany and Romania.

jxbell‘s name may be familiar to you, especially if you played with the Ikarus Egyedi E94, but he also worked on other projects as a scripter. His latest project is the Ikarus C56, which is well-known in Hungary.

The project will contain different versions of the S41XLE Business. The first one is the S415 LE, then comes the S416 and 418 LE. Further informations can be found on Webdisk.

Although we saw pictures about this bus first in the middle of the month, the project started in the beginning of May. The 415.04 version will be released at first, but other ones are planned as well. Conversion into OMSI has started, even though the model is not finished. Some details of the driver’s cabin are missing (for example the pointers of the gauges), and the interior textures will be changed, too.

We’re always happy to read about Hungarian projects! If you do as well, here are some informations about the update of the Region Borsod map.
2 more lines will be added to the map, the lines 4049 and 4050. Both are running between Berente, Bányagépjavító üzem and Varbó via 2 different routes. We’ll get 6 new towns, among those, Sajólászlófalva is almost finished, so are out-of-town parts. Other towns are not finished yet, so the map won’t be released soon. Sajószentpéter (this town was included in the first release) will also get a smaller refurbisment, which means mainly model and texture improvements.

A new line was shown on the semi-fictional Středočesko map, and new pictures were posted on the Czech OMSI Forum.

Bad Hügelsdor is a fictional city in Baden-Württemberg province, one of the most beautiful parts in Germany. Services in and around the city are operated by the company VBBH.

Feel free to explore the beautiful scenery while driving on the 7 daytime and 3 night lines! The random events, thousands of unique objects and open-air organizations make the experience even better.

The map also includes an own ticketpack, new passenger voices, Christmas events and 2 driveable buses, the MAN A20 Ü and A25 ÜLL, both fitted with the repaint of the map.
The addon costs €25 and can be purchased via Steam.

This map shows the northwestern part of Hungary and includes 9 local as well as 3 regional lines. The update contains a bunch of improvements and some new things, too. The Solaris BVG pack is required. Further informations and download link can be found the the own website of the map.

Volvorider64 presented his 3-axle Volvo 8900LE on the LOTUS Forum in April. He actually started it earlier with his friend, but that project was cancelled, and he restarted it alone. He didn’t tell so much, currently his working on the body of the bus.

We found this Flexity on the Forum as well. Although it’s still in the modelling phase, many things are done to it. To be more accurate, it’s based on the K4000 type, which is used in Cologne. The conversion hasn’t started yet, and some textures will be changed.

The development of this map started in November, the developer team is made of 4 people. They’re planning to make the line 6, which runs between Flughafen-Süd (Airport South) and Universität (University). The line serves 23 intermediate stops and a journey between the two termini takes 33 minutes. The first release will include a part of the line only. The team is currently working on the area of the airport, using many unique objects.

The Tram 2000 is a narrow-gauge (1000mm) tram type designed for Zurich. It was built from 1976. The vehicle can be downloaded from Steam Workshop.

Are you tired of the modern tram dashboards with the shocking collection of useless buttons, levers, displays and gauges? Or do you want to do some workout on the rails? Well, Kartoffelphantom has something special for you! He released one of his side projects, a draisine (biomechanic handcar). You can download it here. Driving tutorial can be found in the readme file.

Now that AI is available in LOTUS, Kartoffelphantom made a little AI pack for the game. It includes several types of Trabant as well as a MAN TGL truck, but more models may be added later. You can download it from Steam Workshop, as usual. 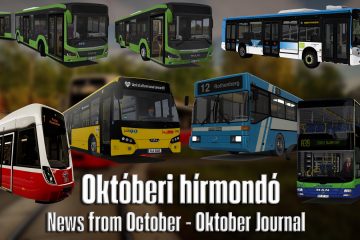