Hi everyone! Like the Omsi+ did before, we would also like to start a review series of what happened in the previous month around OMSI and LOTUS. Here you can see the first one in this year.

The author started this project in 2017, at this time just to practice modelling. Later he decided to convert it into OMSI, so in 2018 he presented his project on the official OMSI-Forum. Currently he’s optimizing the models and re-convert them into OMSI.

The author presented this project in August 2018, and he also told which versions are planned. If everything goes fine, we’ll be able to play with the 2071.40 (DPP – Praha, DSZO – Zlín), 2071.30 (DPP – Praha) versions (these are solo buses), as well as the articulated 2081.40 (DPP – Praha). The bus is actually a major upgrade of a previously released version, so the body, the dashboard and most parts of the interior have been improved. Here you can see some pictures about these. You can see more via this link.

In the game, we will see the type CN 12 first, which has a length of 12 m. It’s also possible that also the longer (13,5 m) or the shorter (8,5 m or 9,5 m) types will be done later. At first, the author makes the exterior of the bus, the interior will come after that. You can read more about this project on the official Czech OMSI Forum.

As in the case of the Irisbus Citybus, here we can also see an upgrade of a previously released bus. According to the author’s Facebook page, the bus got some setvars e. g. variable bonnet, curtains in the interior, outside logos. Some details have been improved, too, for example the front, the back, the gas cap and some handrails. The bus got new headlights and the indicators got new textures. Julien also told us that the repaint sample of the model is the same as the previous version (C954), but without errors and the doors will also be part of the sample.

According to the latest informations, the bus waits for sounds, but that doesn’t affect the release date. Whilst waiting, the author makes some repaints, the newest one is an Izmir repaint for the older version.
Here you can find the author’s Facebook page and website.

We’ve found these pictures about the W.I.P. MAN A01 on the official OMSI-Forum. The author gave no further information.

You may have heard about this project if you follow the Hungarian OMSI-groups. The members of OMSI Workshop had a conversation with the author recently, and they published a short review video on their Facebook page.

The author posts about this project only on his Instagram without giving any further information.

Releases in the previous month:

Although this mod released in December, we thought it should be part of the list. The vehicle includes other specifications such as special LAWO Fonts, 3 different ticket printers and 2 types of side displays. The author also wants to make the Szczecin and the Schiwy Reisen versions.
You can download the bus here.

Skinner11 released a patch for the bus, which includes the following:

The patch can be downloaded here.

This repaint pack is made for the type Ikarus 280.02 and contains 16 repaints. The pack can be downloaded here.

The Krumenaab 2019 map released. The new version includes 2 new urban lines and some intercity and shuttle ones as well. You can download the map here.

A new fictional German map released as well, which brings you to the area of the former West Germany. You can download the map from the official OMSI-Forum.

Sokeri published 2 pictures (see below) on the LOTUS Discord server, which shows the current state of the W.I.P. Volvo 8700LE 6×2 suburban/intercity bus. The most detailed part is the driver’s cabin, since that’s what we see the most while driving.

In October 2018, team Hévműhely posted some render pictures on their Facebook page, which showed the model of the well-known vehicle, that was produced in the GDR. Since then, they made many things to it (maybe more than we did to the TW6000 tram :D). Although the train still needs some textures, it’s already converted into LOTUS. Around Christmas, reflexions were added to LOTUS, so team Hévműhely started the year with the mirrors of the train. They also improved the interior, the lower quality textures have been changed and the empty surfaces got textures. We’re really looking forward to this project.

mr.manul also posted some pictures on the LOTUS Discord server about his Konstal 105N tram, which he started in August 2019. These trams were put into service in several places in Poland, for example Poznań. Although the model seems really detailed, the author is not satisfied with it so some parts will be remodelled.

In March 2019, Kartoffelphantom posted on the LOTUS-Forum that he started the BVG version of the Tatra KT4Dtm for LOTUS. Although he already made it for OMSI, he wasn’t statisfied with it so he started it from the beginnings. The new model is more detailed than the one for OMSI. Most recently, he was working on the dashboard, the lights on it are now working. More pictures can be seen in this topic.

Although there’s no AI in LOTUS currently, but Kartoffelphantom is already prepared for it. Up to the time AI will be added for LOTUS, we can see these vehicles parking only.

Cedric started this tram in December 2018. Currently he’s working on the scripts, so for example the IBIS-Plus on-board unit lists all available routes of the entered line. The on-board display is also working, but some functions are still missing. The fonts are realistic, including the one which is used for the vehicle ID.
More pictures can be seen in this topic. 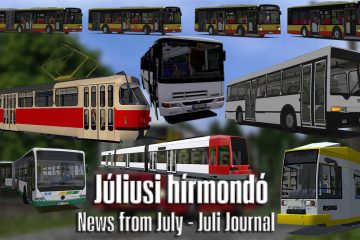 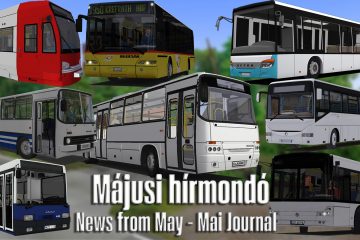